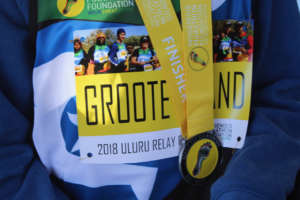 The National Deadly Fun Run Championships (NDFRC) is an annual event held at Yulara NT, a short distance from Australia’s most iconic Indigenous landmark – Uluru.
The NDFRC is Australia’s largest Indigenous running event and brings together representatives from Indigenous communities across the country who have been chosen through their regular participation in the Deadly Fun Run Series. 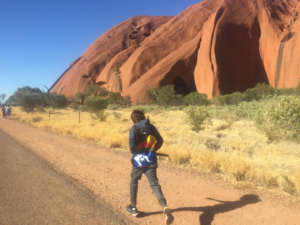 Four junior representatives were selected based on the Bush Fit Mob Colour Fun Runs held in Angurugu, Umbakumba and Milyakburra throughout the past several months where each participant ran a 3km race event in the morning. After the Championships, all participants are taken out to Uluru where a significant event takes place – a 12km relay run around the base of Uluru where the Mutitjulu Community, who are the Traditional Owners of Uluru resides.

Each community was invited to bring a message stick of significance from their community. The Traditional Owners of Mutitjulu were presented with the woomera which has much cultural significance to the Groote Archipelago.